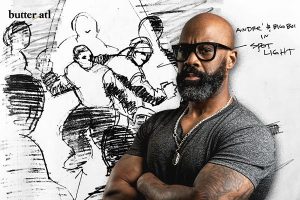 D.L. Warfield’s career at Atlanta’s legendary LaFace Records began with a terrorist threat. At least that was the creative message he wanted to send.

The St. Louis native was already well on his way to a career as a designer, having worked as a fashion designer for the famous retail store Oak Tree in the late ‘80s and early ‘90s, as well as a fashion line for the hip-hop record label Tommy Boy in New York City.

In 1995 he heard about a job opening for a creative director at LaFace, and he wanted to make sure he got the attention of the company’s founders, L.A. Reid and Babyface.

So, he sent his portfolio, but in a package made to look like an explosive. The tagline on the package read “Hire DL WARFIELD for the job or else.” People around the LaFace offices at the time saw it and said “DL Warfield is the bomb.” It was the ‘90s.

He got the gig.

Can you believe it? Yes? Me too. No? Keep reading then.